A scarf for dogs in chimney style – what is it?

A scarf (also known as a kierchief or bandana) for a dog is a textile gadget to put on the dog’s neck. You put the chimney type scarf on your dog simply by pulling it over his or her head (yes, just like the martingale collar). It’s super simple to put it on and it doesn’t bother the dog at all. We just slip it on and voila! We can just proceed to enjoy watching our cute dog wearing the colourful gadget. Thanks to its simple construction without any velcros pins, strings or bindings, the chimney-type scarf stays in its place for as long as we want unlike any regular scarves that usually loosen up. The soft fabric is comfortable for the dog, easy to wash and doesn’t take up to much space when it is not used.

The advantages of the chimney scarf for dogs

• very easy to put on – the process of putting the scarf on does not bother the dog
• nothing falls off, unties, loosens up or annoys the dog
• good print quality
• easy to wash in a washing machine

A scarf for a dog – who should wear it and where?

Dogs’ scarves are great for them city dogs. We have narrow streets and sidewalks so the dogs and the pedestrians stay in each others’ space and are forced to coexist. Dogs don’t have the best PR among all of the social groups. Small dogs can do more while big ones are in the spotlight. One of the readers of our fanpage writes about his problems concerning living with his dog in a big city.
I’m a caregiver of a 20 kilo middle-aged black dog. The doggie came from the shelter. He’s very timid and really mellow. Yet, what we are exposed to daily, are comments such as: “hold this beast tight!” or “stay away son or it’ll bite you” or “why have a black dog?!” and so on. Nothing pleasant. The dog is so chill he never even barks. There’s some kind of a social sigma around big dogs and especially the black ones. Sometimes I just feel tired of it. :(

However, I’ve noticed that nothing works to dogs’ advantage in a public space quite as good as dressing him or her up in some colourful accessories. A scarf on the neck, usually associated with a fashionable young person or a child, is for a dog’s image like a sweet cherry on the top for a cake. If you want your neighbours to be totally gobsmacked and all the dog persons from the nearby park to ogle you with awe, consider picking up a scarf with a trendy design.

A chimney scarf as an earflap

This type of scarf is especially useful for long-haired dogs. We can protect their ears from dipping in the bowl during drinking or eating. The fabric is light and airy so it works well for all the seasons.

Bandana for a dog and… for a human

Or, you can do it in yet another way. Dress your pup in one of the walk outfits: Rebel, Shine in Blue, Doggo Artisto or Shake and then nonchalantly drape a scarf with a matching design around your own neck. The size fits both human and dog. It’s just a bit shorter than the full-sized human one. The fabric that the scarf is made of is great for spring and fall, when it is nice to wear something around your neck, but also for summer as the fabric is breathable and can be worn in several different ways, for instance as a head protection. Yours and your pupper’s bond is a match made in heaven and now it can be seen from afar <3

A gift idea for a dog person

If you’re looking for a great present to give to a dog person – your good friend with a freshly adopted doggo, an old friend who’s left alone with a loved dog after a break-up, your mom who always wants to give a dog the world or your puppy-lover neighbour who always saves the day with a walk when you do overtime at work. Look no more! Two scarves: one for dogs and another for his human is a practical gift that at the same time shows your appreciation for the special bond between them two.

A dog scarf as a gadget for a photo-shoot

If you plan a smashing photo-shoot for your dog, a scarf with a colourful print thrown around his neck will be an original touch.
An idea for a photo-shoot: try matching the colours of the background with those of your accessories. Weronika Wiśniewska, while creating the photo collection, used the colours of the bridge to bring out the red in the scarf in the Rebel print. For the Shine in Blue print scarf she set the models against a shop window reflecting the light on a cloudy day. The architecture of the Old Town Market Place in Poznań was perfect to present the Doggo Artisto design.

A dog wearing a scarf – the ultimate adoption hack

All of the aforementioned reasons are also true in case of dogs looking for homes. The first step for successful adoption is to draw in the attention of the potential caregiver. Therefore, in the age of the Internet, photos play an enormous role. A dog wearing a bright scarf catches the eye. He instantly seems more stylish, groomed and lovable and worthy of paying attention to. The scarf on a dog’s neck is an element that makes the dog stand out and have more charisma. 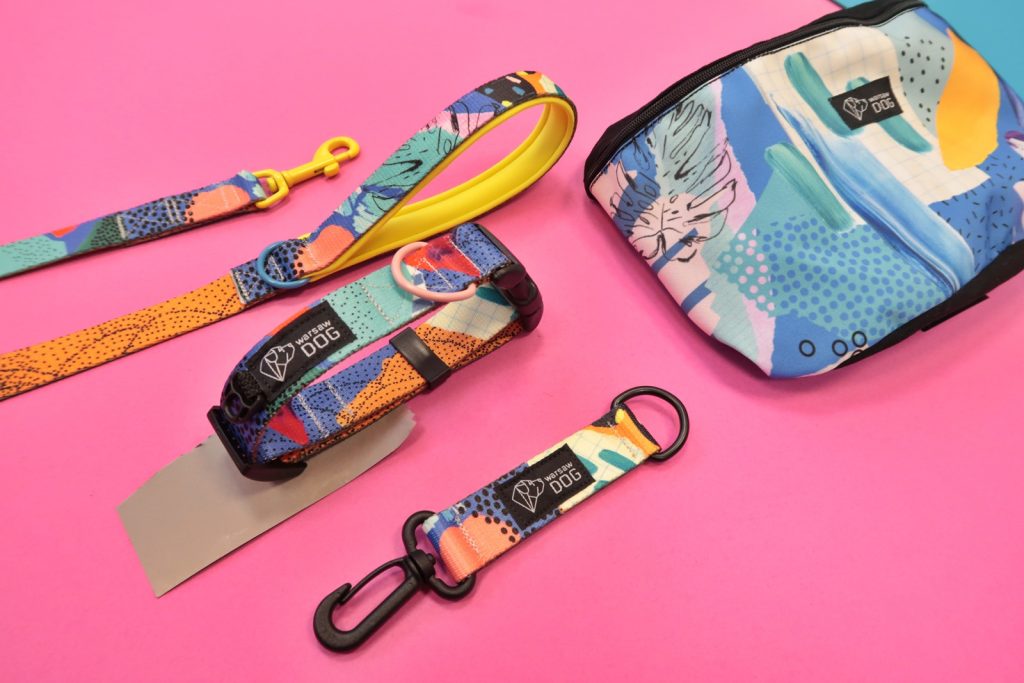 Long live the 80s! New collection in collab with Adadenada